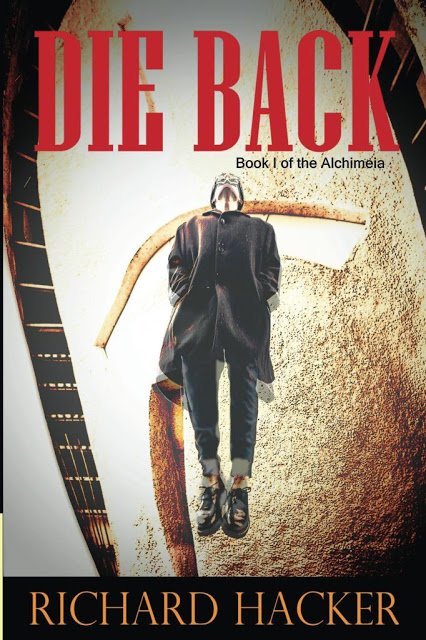 Title: DIE BACK (Book One of the Alchimeia)

In 272 AD Egypt, an enemy thwarts an attempt by League Inkers, Thomas Shaw and Nikki Babineaux, to obtain the Alchįmeia,
a document holding alchemical secrets. Sensing his impending death,
Thomas secures Nikki’s promise to keep his son, Addison, from the
League, an organization defending the time continuum. After his father’s
death, Addison inherits a mysterious pen, accidentally inking himself
into the consciousness of a man who dies on a muddy WWI battlefield in
France. Hoping to make sense of his experience, he confides in Nikki,
his best friend and unknown to Addison, an Inker. Keeping her promise to
Thomas, she discounts Addison’s experience.Fixated on the pen, Addison inks into a B-17 bombardier in 1943. The
pilot, whose consciousness has been taken over by someone calling
himself Kairos, gloats over killing Addison’s father and boasts of plans
to destroy the League. As Kairos attempts to wrest Addison’s
consciousness, Nikki shocks Addison out of the Inking. She confesses her
knowledge of  the League. When Kairos threatens to steal aviation
technology, she she sends Addison and his partner, Jules, to an Army
test of the Wright Flyer in 1908. Believing they have succeeded, they
return to find the continuum shifted and Nikki knowing nothing about the
League.Inking back to his father’s mission in Alexandria, Addison and Jules
hope to get his help in returning the time continuum to its original
state. Instead, Addison’s father gives him the Alchįmeia to
hide in a crypt at the Great Lighthouse on Phalos. On their return to
the present a Kairos agent murders Jules, her consciousness Inked into
the past. Addison follows the clues, Inking into Pizarro in 16th century
Peru. He finds Jules in the child bride of the Inca emperor. His plan
to find the technology and save Jules without destroying the Inca
civilization is thwarted by a fleet of Inca airships. Captured, he is
taken to Machu Picchu. With Jules help, they find the stolen schematics,
but are confronted by Kairos. He stabs Addison, forcing Addison’s
consciousness back to the present and traps Jules in the 16th Century.
Addison returns to another altered world. Nikki no longer exists, the
world is at war with the Inca, and Manhattan lay in ruins.Addison Inks his father, learning the origins of the League. Thomas
urges Addison to uncover their enemy with the help of his colleague,
Maya. Putting suspicion on another inker,  Cameron, she insists he must
be killing Inkers and acquiring Pens. In a final attempt to stop him,
they entrap Cameron, only for Addison to discover Maya is Kairos, his
enemy.  She kills Cameron, also wounding Addison.  He chases Maya, who
intimates that she holds his mother’s, Rebecca’s, consciousness.
Confused he delays, giving her time to scrawl a name with her pen before
shooting her dead.Inked away when Maya died, Kairos finds himself, not in his intended
host, Hitler, but in a German infantry soldier POW in the Ardenne during
the Battle of the Bulge, WWII. Hoping to repair the shift in the time
continuum, Addison brings the League Pens together with the fate of the
world and everyone he loves at stake. He awakens to a dissimilar world,
but Jules and Nikki exist. And with life there is always hope.
First Chapter
I am an Inker. Without death
my job goes undone. Like other Inkers, I plan for it, yearn for it while never
loving it, but this time, death might well prove to be my doom. Alchemic
algorithms placed my partner Nikki and I at the historic burning of the Great
Library of Alexandria, Egypt, in 272 AD. We had inked ourselves into the
consciousness of the right people—an arthritic librarian and his slave boy—and
stole the Alchi̱meía papyrus scrolls for their rare alchemical formulas. 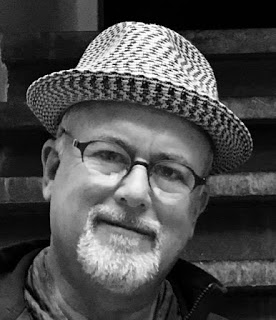 Richard Hacker is a longtime resident of Austin, Texas who now writes and lives in Seattle.His writing has been recognized by the Writer’s League of Texas and
the Pacific Northwest Writers Association. In addition to his writing,
he provides editing services to other writers and is the editor of an
online science fiction and fantasy journal, Del Sol Review. His three
published humorous crime novels ride the sometimes thin line between
fact and fiction in Texas. DIE BACK, his first fantasy thriller novel, has been published by Del Sol Press.When not writing he’s singing in a vocal jazz ensemble, cooking with a
sous vide and a blow torch, or exploring the Pacific Northwest with his
wife and his springer spaniel, Jazz.Website Link: http://www.richardhacker.comTwitter Link: @Richard_HackerFacebook Link: http://www.facebook.com/RWHacker

Visit us at Pump Up Your Book!

5 thoughts on “Die Back By Richard Hacker #Book Tour”

As an Amazon Associate I earn from qualifying purchases on this blog. What % I do earn helps to fund the giveaways that are offered on this blog. To learn more about the affiliate links on my blog please read my privacy policy by clicking here. Thank you for all of your support.
END_OF_DOCUMENT_TOKEN_TO_BE_REPLACED
%d bloggers like this: