No More Time
(A Dodie O’Dell Mystery)
by Suzanne Trauth 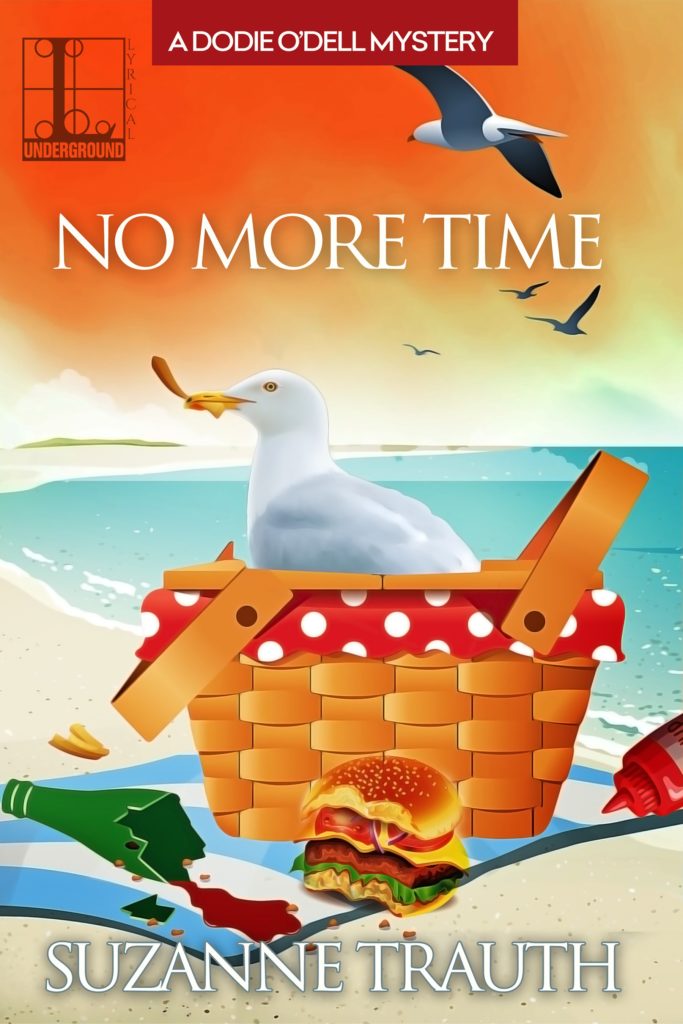 Restaurant manager Dodie O’Dell has found her niche in the cozy New Jersey town of Etonville, creating menus that make a delicious double-act with the community theater’s productions. Now she’s ready for a vacation at the Jersey Shore town she called home before a hurricane hit. Sun, salty air, and seagulls make for a nostalgic escape from regular life—until a contingent from Etonville arrives to compete in a Jersey Shore theater festival.

Roped into helping her former boss cater the event, Dodie also gets a visit from her old flame, Jackson, who’s hoping to revive his charter boat business and is looking for a place to crash. Before Dodie can tell him that ship has sailed, Jackson’s partner is found murdered on his boat. Dodie knows her ex is a mooch, but she’s sure he’s no killer. But as she follows a trail of evidence that leads into her own past, Dodie stumbles on a dangerous conspiracy theory that could bring the festival to a shocking finale…

Suzanne Trauth is a novelist, playwright, screenwriter, and a former theatre professor at a university. She is a member of Mystery Writers of America, Sisters in Crime, the Dramatists Guild, and League of Professional Theatre Women. When she is not writing, Suzanne coaches actors and serves as a celebrant performing wedding ceremonies. She lives in Woodland Park, New Jersey.

By noon we were both hot and famished. I suggested a break from the sun at the tiki bar and we gathered our beach gear and trudged through the sand to the Polynesian music. We were halfway through our bucket of steamed clams when an elderly twosome at a table next to ours gasped in shock. We couldn’t help noticing.

“Is everything okay?” I asked gently.

The woman’s head bobbled and her wide-brimmed sunhat swung from side to side. She picked up the newspaper she’d been reading, the Candle Beach Courier, a local rag, and shoved the front page at us. “He was such a nice boy. We knew his parents years ago.”
I smiled sympathetically and scanned the sheet. Then I gasped.

“Dodie, what’s the matter?” Lola said.
“Were you acquainted with him too?” the woman asked.

I nodded numbly. Was I ever. The headline read LOCAL MAN DEAD. Underneath was a photo of the victim: It was Vinnie C. I rotated the paper so Lola could see the front page. “It’s him,” I said hoarsely.

I scanned the story. Apparently his body had been washed up on the beach sometime overnight and was discovered by a jogger early today in time to make the mid-morning edition. The police were calling it a drowning and speculating that he’d fallen off his boat, The Bounty, which had drifted half a mile off the shoreline. No foul play suspected at the moment but the investigation was ongoing.

I offered to return the newspaper but the couple refused to accept it, saying the story was too upsetting. They picked up their bill and left.

“Wow. What a coincidence. We were talking about how Jackson saw him yesterday …” Lola stopped. A light bulb went on. “The police will want to speak with Jackson. He might have been one of the last people to see Vinnie alive.”

It was Lola’s last word that brought me up short: alive. Jackson had been steamed during that meeting on the boardwalk. Did he know anything about Vinnie’s last hours? If Bill were here he’d tell me to mind my own business, let Jackson alone, let the police determine the actual cause of death. Bill was right, of course. But something about the whole event didn’t sit right with me. Why did Jackson lie about what happened when he met Vinnie?

As an Amazon Associate I earn from qualifying purchases on this blog. What % I do earn helps to fund the giveaways that are offered on this blog. To learn more about the affiliate links on my blog please read my privacy policy by clicking here. Thank you for all of your support.
END_OF_DOCUMENT_TOKEN_TO_BE_REPLACED
%d bloggers like this: