Murder by Perfection by Lauren Carr mixes the police procedural
with the spy game, in much the same way that James Patterson does with
his Alex Cross novels. Ripping true crime stories from the headlines and
weaving her characters into the plotlines, while adding a dash of humor
and romance, this highly entertaining and fast-paced Thorny Rose
Mystery will have readers seeing the darker side of perfection.” Review by The iRead Reviews

“Lauren Carr is a master of the light murder mystery. Each contains a
strong couple as the central characters. Both the male and female roles
are great role models – smart, loyal, talented and always interested in
the truth. And as the author is a huge dog lover, there are always
several incredible pets, each with their own unique personality. No
matter how serious the threat they are facing, the author manages to
work in a little humor to keep the tale from getting too dark.

Murder by Perfection is book 3 in Carr’s Thorny Rose Mystery
Series. The main characters – Murphy and Jessica – fell in love at first
sight and married quickly. This 3rd story sees them struggling to try
to find balance in their daily lives as well as enough free time to
spend together. After a quarrel one evening, Murphy takes off on his
motorcycle to calm down – and disappears! He has been kidnapped. Why –
no one knows for sure. Friends, family and the government come together
to search for answers. Can he be found in time?

Murder by Perfection is a wonderful read and a perfect to
escape from the challenges of a busy day. Danger, intrigue, humor, and
love all take their turn in this tale which will keep you reading into
the wee hours.” Review by Marilyn R. Wilson, Olio by Marilyn

Beware: Perfection has a dark side!

Frustrated with their busy schedules, Murphy Thornton and Jessica
Faraday attempt to find togetherness by scheduling a weekly date night.
The last thing Jessica Faraday expected for her date night was to take a
couple’s gourmet cooking course at the Stepford Kitchen Studio, owned
by Chef Natalie Stepford―the model of perfection in looks, home, and
business.

When Natalie ends up dead and Murphy goes missing, the Thorny Rose
detectives must peel back the layers of Natalie Stepford’s life to
discover that the pursuit of perfection can be deadly.

Check out these other great Thorny Rose Mysteries::

“Lauren Carr’s books are never boring, that’s for sure. They entertain,
give us a good mystery to dig into, keep the reader guessing, give us a
few good laughs and make us eager for the next book. Warning: Lauren
Carr’s series are addictive, so be ready to read more than just one
book!”  Review by Laura Fabiani, Library of Clean Reads 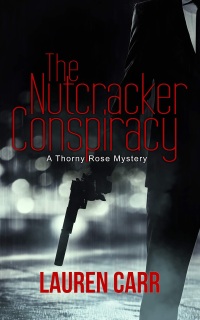 Three years ago, the nation gasped in horror when the President of the
United States barely escaped an assassination attempt that left two
dead—the vice president’s wife and the attempted assassin.  Even after
numerous investigations proved otherwise, conspiracy theorists argue
that the assassin was acting on orders from the CIA, FBI, and every
federal agency within a hundred miles of the capital.

Aspiring Author Dean Conway is the last person Lieutenant Commander
Murphy Thornton wants to spend his Saturday afternoon when they end up
at the same wedding reception table. While their wives tend to
bridesmaid duties, Murphy is trapped listening to Dean’s latest
work-in-project—completing the manuscript of an investigative journalist
who’d disappeared months earlier.

“She was number twelve,” Dean says.

“Twelve witnesses connected to or investigating The Nutcracker shooting have died either in an accident or suicide.”

“The plot was well thought out and there were no loose ends at the end.
The story was fast paced to keep my attention easily. The book is a
treat to a reader who loves a mix of genres in their reads. It has the
right amount of romance, mystery, action and thrill to keep me satisfied
from the start to the end.” – Reviewer: The Travelogue of a Book Addict

Five women with seemingly nothing in common are found brutally murdered
in a townhome outside Washington, DC. Among the many questions
surrounding the massacre is what had brought these apparent strangers
together only to be killed.

Taking on his first official murder case, Lieutenant Murphy Thornton,
USN, believes that if he can uncover the thread connecting the victims,
then he can find their murderer.

The case takes an unexpected turn when Murphy discovers that one of the
victims has a connection to his stepmother, Homicide Detective Cameron
Gates. One wintry night, over a dozen years before, her first husband, a
Pennsylvania State trooper, had been run down while working a night
shift on the turnpike.

In this first installment of the Thorny Rose Mysteries, the Lovers in
Crime join newlyweds Murphy Thornton and Jessica Faraday to shift
through a web of lies and cover-ups. Together, can the detectives of the
Thorny Rose uncover the truth without falling victim to a cunning
killer?

“Lauren Carr has yet gone it again with another great mystery. I am so
loving this series and can’t wait for more. I know have to read more of
Lauren’s books. She is a very talented writer.” Review by Stacey Schneller of Books, Dreams, Life.

“Mysteries, murder, danger, and memories that threatens their
lives keeps the action and suspense at a high level and even when the
answers are found, it left me wanting more.” – Review by Sherry Fundin of Fundinmental 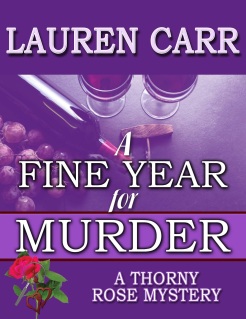 After ten months of marital bliss, Jessica Faraday and Murphy Thornton
are still discovering and adjusting to their life together. Settled in
their new home, everything appears to be perfect … except in the middle
of the night when, in the darkest shadows of her subconscious, a deep
secret from Jessica’s past creeps to the surface to make her strike out
at Murphy.When investigative journalist Dallas Walker tells the couple about her
latest case, known as the Pine Bridge Massacre, they realize Jessica may
have witnessed the murder of a family while visiting family at the
winery near-by, and suppressed the memory.

Determined to uncover the truth and find justice for the murder victims,
Jessica and Murphy return to the scene of the crime with Dallas Walker,
a spunky bull-headed Texan. Can this family reunion bring closure for a
community touched by tragedy or will this prickly get-together bring an
end to the Thorny Rose couple?

Letting Go of Your Book

This post is an answer to a question I am often asked: How can you write three to four books a year?

A while back, I rejected a project in which an author asked me to edit his book. Not only did I turn down the job because my schedule does not allow me to edit other authors’ books anymore, but there was another reason I had turned down the project.

The first installment in a trilogy, the book had already been edited and released to the public to favorable reviews. Years later, readers of this first book are still waiting for the next installment. However, instead of focusing on completing the second book, he had decided to go back to work on the first—already completed and released—book.

Note that the changes this author wanted to make were not glaring grammatical errors that he wanted me to correct. Rather, a year or so after the book’s release, he had picked it up again and started reading it and decided that he could “fine-tune” it.

Frankly, this is not an uncommon problem with some writers. Just the other day I saw where the author of one book, which had been released three years ago, announced that he had just received his first shipment of this same book: “Revamped and Re-Released.”

Why? I wondered. This book had received a ton of good reviews. Why has he not moved on to write another book?

Some writers simply have a problem letting go.

Just like how some writers have a problem focusing on one project to its completion, other writers have the opposite problem. They can’t let go and walk away after having written the words “The End.”

There are always at least one or two writers who can’t let go of “their baby” (as I heard one writer describe it) when I teach a novel writing class. They are easy to spot. They have a book inside them that they have been working on for five, ten, fifteen, or even twenty years.

I can still remember the very first thing I learned about writing. It was in my first writing class that my journalism that my professor said, “Writers never finish a project. They quit working on it.”

As a prolific writer who pens three (aiming for four) books a year, I know intimately what he was talking about.

A writer can edit, re-write, revise, and proofread an article, short story, or book over and over again, and still find sections that can be fine-tuned or corrections to be made. That’s why professional writers, like myself, must set a deadline in which they force themselves to walk away from the project. No, they’re not done. Rather, they’re letting it go and moving onto their next project.

Writers who don’t let go, walk away, and never look back will continue to write, edit, rewrite, re-edit, proofread one single book for their whole lives. Because—it is impossible to finish writing a book.

Serious writers learn to let their books go. Admittedly, this can be very difficult—especially for those writers who view their books as “babies.” I once read an article by an editor who explained very simply, “It’s not a baby. It’s a book.”

Here’s a few pointers for writers who want to become prolific authors with more than one, twenty-year-old unfinished novel under their belt:

As a full-time author, I still work on self-imposed deadlines. Since I’m my own boss, I can move the deadline around (sometimes) but I still stick as close to it as possible.

Every writer is different. Personally, after completing the rough draft, I go through a manuscript to rewrite it. Then, I will edit it. After editing, I send it to my editor.  While my current work in progress is with the editor, I will start working on my next book. (The day after sending The Nutcracker Conspiracy to the editor, I started writing notes for Came Upon a Midnight Murder!) Then, after going through the edits, I will proofread the book after layout. That is five times that I will go through a book.

But, the pros who have more than one twenty-year-old unfinished book under their belt, they let each book go, direct their attention on the next book, and never look back. 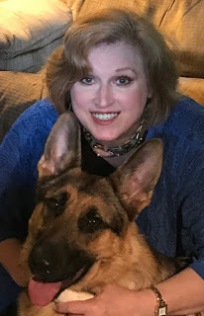 A popular speaker, Lauren is also
the owner of Acorn Book Service, the umbrella under which falls iRead
Book Tours. She lives with her husband and two spoiled rotten German
Shepherds on a mountain in Harpers Ferry, WV.

Feb 3 – b for bookreview – book spotlight of The Nutcracker Conspiracy

Feb 14 – Pause for Tales – book review of The Nutcracker Conspiracy

As an Amazon Associate I earn from qualifying purchases on this blog. What % I do earn helps to fund the giveaways that are offered on this blog. To learn more about the affiliate links on my blog please read my privacy policy by clicking here. Thank you for all of your support.
END_OF_DOCUMENT_TOKEN_TO_BE_REPLACED
%d bloggers like this: