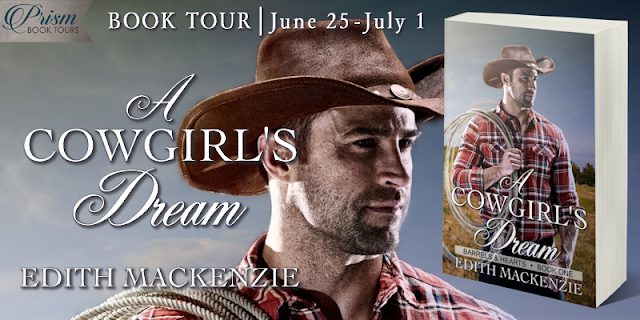 On Tour with Prism Book Tours

We hope you enjoyed the tour! If you missed any of the stops
you’ll find snippets, as well as the link to each full post, below:

What inspired you to write A Cowgirl’s Dream?

I have been involved with horses for most of my life and love happy ever afters. As an Aussie, I wanted to write a character that embodied a lot of the cowgirls that I know. I also wanted to write a story about the strong women in rodeo, their sisterhoods and men they choose to love.

“…loved it! You know my love of cowboys, and this just made me love them more! There were sweet moments and swoon worthy moments!”

“I loved Frankie’s character . . . I also loved the friendships in the book. . . . If you love horses, you will enjoy reading A Cowgirl’s Dream. This book is the first book in the series. I look forward to reading the next book.”

Reading Is My SuperPower – Review

“If you want a light romance with diverse characters, and you love cowboys, then A Cowgirl’s Dream is a new book you’ll want to check out. It’s not your typical cowboy story . . . Instead of Texas men, we have a ranch full of Brazilian cowboys & an Aussie cowgirl who ‘barrels’ in to the mix. . . . the romance is sweet with plenty of sparks and the rodeo/horse training aspect to the story is full of energy.”
Splashes of Joy – Guest Post

A mock magazine interview for Luciano – The love interest

Not since the great Eduardo Cabrera dominated the bull riding scene, have we seen a Brazilian rider storm up the rankings the way Luciano Navarro has. Along with his compatriot, Joao Rojas, lately it seems every event has set the green flag flying. I was lucky enough to get a chance to sit down with Luciano after his win at Houston and interview him.

Since you started making a splash at rodeos, everyone has compared you to Eduardo Cabrera. Do you think the comparison is justified?
Obviously I appreciate being compared to a champion like that. Senhor Eduardo has been a great mentor to myself and Joao, helping us find our feet in a strange country. I hope that I can make him proud. . .

Why was it that she only owned jeans and T-shirts? Most girls have at least one dress! Giving up, Frankie dramatically flopped face-first onto her bed, deciding she would just spend the entire BBQ in that position. Honestly, there was nothing else she could do.

“Do I even want to know?” Deb popped her head into the room.

“Doff weeve muy loon,” she mumbled into the bedspread.

“Duff’s a loon? Do we even know a Duff? Hey, Megan, do you know a Duff?” Deb called down the hall.

“No, why?” came the reply from the kitchen.

“Ha-ha, you’re so funny,” Frankie grumbled, raising her head off the bed. Her hair now closely resembled a bird’s nest freshly fallen from a tree. In a storm. A bad one. Maybe cyclonic. “I said Leave. Me. Alone.” She theatrically dropped her head back down.

Inspiration for the Series

I really wanted to write about a core group of women that focused on the ups and downs of close female friendship. It was important to me that these women still had their own identities, dreams and struggles, all while finding love. It was always going to be about cowgirls since horses have been my passion ever since I can remember. I’m an Australian and my husband uses the most outlandish Aussie slang of anyone I’ve ever met. When we travel, most of the time no one has a clue what he’s talking about. I thought it would be fun to use some of that in my characters. . .

“Get ready for a wild, romantic ride in Edith MacKenzie’s A Cowgirl’s Dream! . . . The story that unfolds between Frankie and Luciano is certainly a fun one. The author’s experience with horses shines through the rodeo aspects, and Frankie and Luciano prove to be an easy couple to root for page after page. . . . Overall, an enjoyable afternoon cowgirl-romance read. Definitely worth checking out if you’re interested . . .”

“I read the whole thing while sitting poolside on a mini-vacation. I still like to read about the competitions in addition to the romance. I have already grabbed the free prequel and am looking forward to the releases of the next in the series.”

underneath the covers – Excerpt

He looked at Gabi for permission. “Is she free tomorrow?”

She checked her phone. “I don’t have anything booked in for her.”

“Good. I will pick her up after lunch,” he nodded his head decisively. “I look forward to showing you around, Querida.”

“Have you guys finished?” Beet red, Frankie attempted to return to her meal.

As Gabi walked off to find some drinks, Frankie self-consciously moved to one side of the food table. Curiously, she looked around at the various groups of people gathered. She found herself on the other end of a gaze with frankly the most magnetically attractive man she had ever laid eyes on. The stranger had the swarthy complexion of most of the assembled guests. He gave a slow, seductive smile while he returned her candid appraisal, a hot-blooded gleam flaring in his dark, smiling eyes, the corners crinkling into lines that looked well-used. The man had a smile that would put a Hollywood actor to shame.
Candrel’s Crafts, Cooks, and Characters – Interview
What is it about cowboys and cowgirls that is so appealing in the romance genre?

The strong silent type clad in snug denim? Strong capable women that know their own mind. Especially in Australia I think it is how we still like to think of ourselves. There is a sense of romance to that type of lifestyle.

Frankie’s temper began to rise. “You are unbelievable.”

Her mouth dropped open at his arrogance and she shook her head. “I didn’t mean it in a good way. Look, good talk, let’s not rush to do this again.” She spun on her heels and walked back up the aisle.

“I did not think you were the type to run away Frankie,” he called after her, laughter in his voice.

Australia is a beautiful country filled with wildlife that wants to kill you (I won’t even go into the wild animals you won’t find at the zoos, deemed too fierce for capture, such as drop bears, hoops snakes and yetis. Google them at your own peril if you wish to find out more) and food that many outsiders consider inedible (I’m looking at you vegemite and fairy bread). However, it is the language used in the land down under that causes the most difficulty for visitors.

Remembrancy – Excerpt
“Really?” Frankie groaned in frustration as the water splashed from the bucket she had just set down in the stall, soaking the leg of her jeans.
Honestly, she didn’t know whether to laugh or cry. Maybe in the interest of expediency, she could do both at the same time? Thank goodness Delila had settled in happily, already munching on the hay net Gabi brought over. The same Gabi now popped her head over the stall and laughed at her drenched state.
“You know they have showers here, right? No need to wash in a bucket of cold water.”
Don’t forget to enter the giveaway at the end of this post…

An Aussie cowgirl far from home. A handsome Brazilian bull rider. Can they have a rodeo love story of their dreams?

Frankie dreams of being a champion barrel racer. When the opportunity of a lifetime knocks on her door, she moves halfway across the globe to chase it. After having her heart broken, she’s determined to focus on her ambitions. That means no time for cowboys, even if he is bloody cute.

Luciano is well on his way to getting everything he has ever dreamed of. That is, until an Aussie cowgirl crashes into his world, setting his soul on fire. He knows what it takes to get to the top and Frankie has it in spades. Now, all he has to do is convince her to see beyond the suave exterior and give him a chance.

Finally, Frankie has a shot at the championship buckle, but when photos appear of Luciano on the internet, she has to decide whether to stay or walk away. Is she kidding herself, can she have it all? Can Frankie find her courage to trust in love and still chase her Cowgirl’s dream?

(Linked to an Amazon affiliate link.)

Other Books Coming in the Series

(Linked to an Amazon affiliate link.)

Edith MacKenzie or Eddie Mac to her friends is an Australian author of sweet and wholesome contemporary cowboy romance. They say in literary circles to write what you know and Eddie has certainly taken that to heart. Before embarking on a writing career she trained horses professionally and brings that wealth of knowledge to her writing.

Now a mum to a boy and girl, as well as wife, she delights with her tales of strong cowgirls and their adventures in finding love. When not weaving the love stories of her characters, she enjoys hanging out with her family and animals, as well as reading, fishing and camping

Just remember once a cowgirl, always a cowgirl. 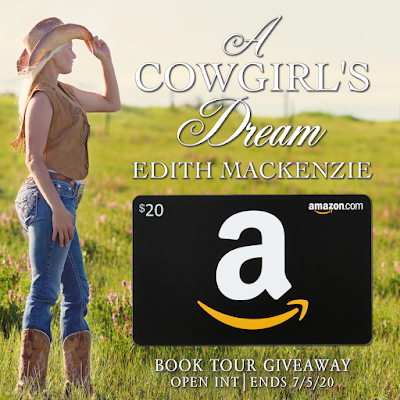 One winner will receive a $20 Amazon eGift Card
Open internationally to those eligible to use one of Amazon’s branches
Ends July 5, 2020

As an Amazon Associate I earn from qualifying purchases on this blog. What % I do earn helps to fund the giveaways that are offered on this blog. To learn more about the affiliate links on my blog please read my privacy policy by clicking here. Thank you for all of your support.
END_OF_DOCUMENT_TOKEN_TO_BE_REPLACED
%d bloggers like this: