Welcome to the blog tour for the gripping, thriller, Tea with  Rasputin by Rolf Richardson! 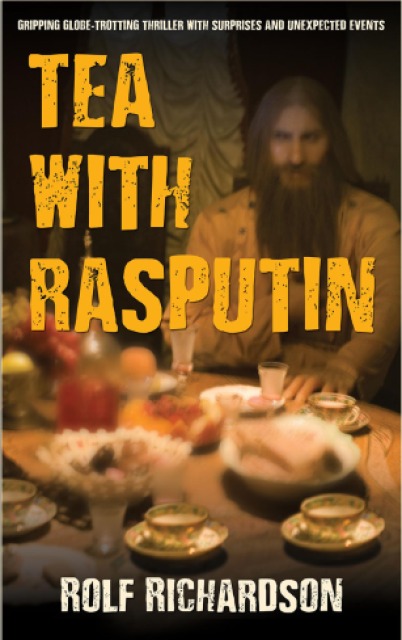 Back at airline HQ near Heathrow, Mr. Halford, Head of Security, is tasked with finding someone to investigate Greg’s case. His team is working to capacity and no one can be spared. So he scrapes the bottom of the barrel and assigns recent recruit, Terry Jackson to the investigation.

Fresh out of training school and awaiting his first posting, Terry flies to Alaska, brimming with enthusiasm at being trusted with such a mission. There he discovers Wilton rented a small plane while on his layover and both are now missing. His last contact appeared to be with Coral, a waitress at the crew watering hole, The Golden Nugget, so with her help Terry set out to find the missing airman.

Their quest appears to be hopeless because Alaska is huge, but they do not give up. The action moves to Hong Kong, Miami, Oxford (England), and finally St. Petersburg for Tea with Rasputin, a ten year globe-trotting saga with many twists and turns.

Join Terry in his investigation, where intrigue, suspense, mystery, humor, and even a little romance lie in wait.

With a life spent in the travel industry, my stories are set in some of the places I’ve found most interesting. As the title suggests, ‘Tea with Rasputin’ end up in Russia, but it starts in Alaska, which used to be Russian, and there’s the first clue.

During the cold war time I flew 747s on the Polar route between Europe and Japan, with layovers in Anchorage, a place I always enjoyed. One day I heard that a colleague had rented a light plane there and simply vanished: never seen again. I used this event as the trigger for my book, weaving a story that takes British boy and American girl via a series of locations to the grand finale in St.Petersburg, Russia.

The time is the 1990s after the collapse of the Soviet Union, when assets of the old regime were being sold off to shady characters, soon to be either billionaires or dead. By now I had taken to lecturing on cruise ships, which often took me to St.Petersburg, a city packed with history.

I call my books ‘Easy Reads’, a mix of mystery action, romance and humor, designed to entertain.

ROLF RICHARDSON is a mongrel English/Norwegian who loves to travel, starting with service in the RAF, flying Britain’s first jet fighter, the Meteor; thereafter 25 years as a British Airways pilot on Argonauts, Britannias, VC10s and 747s.

He then became a roaming photographer, visiting around 110 countries, with over 15,000 photos now sold. He has worked his passage on cruise ships by giving lectures. Taken 3 months to drive round Australia.

A few years ago he set out to put his experiences to further use by writing a series of ‘Easy Read’ books: thrillers with a dash of history, romance and humour.

B is for Book Reviews (Spotlight) https://bforbookreview.wordpress.com